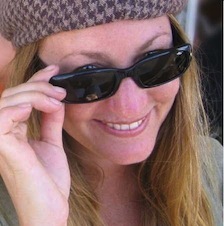 Monday night at the San Diego Music Awards, I was so happy to see Cathryn Beeks on stage as a presenter, looking right at home at the center of the San Diego music community. It’s a sure thing that many of you reading this have attended or performed at a Cathryn Beeks event. I know that I have benefitted tremendously from her help, and I immediately had her in mind when I started my project to interview people working in music. I asked Cathryn to tell me her story because of my own curiosity about all that she does and how she started out, and also just because I wanted to personally recognize her for her dedication to supporting San Diego musicians.

Cathryn is an entertainment coordinator and owner/creator of ListenLocalsd.com, a website that serves as an event calendar, music venue resource, blog, merchandise store, and more. Cathryn makes local music events happen, from start to finish. She is involved in the creation, planning, promotion, and hosting of regular and special events at a variety of music venues in the San Diego area. She’s also a singer-songwriter herself!

Cathryn: “My days consist of dreaming up events and then spending hours on the computer making them happen. Inviting bands, firming up details, making flyers, posting on all the social media sites, etc. Every other evening or so I am out hosting an event somewhere and when I’m not doing that I’m writing or rehearsing with my own band, Garbo.”

I think the really special thing about what Cathryn does is that she gives unknown artists in the beginning stages of their career a platform to begin performing in a show setting. Granted, many veteran San Diego songwriters (and winners of San Diego Music Awards!) can be seen playing at her events, but it is her discernment of when a new performer is ready for her showcases that has helped transition hundreds of local musicians from playing at the open mic level to playing as featured entertainment for an invited audience.

Cathryn is also a radio host. For several years she has produced and hosted the Homegrown Hour broadcast on 102.1 KPRI every Sunday evening at 8pm. Co-hosted by musician/producer/engineer Jeff Berkley, Homegrown plays recordings submitted exclusively from local bands and singer-songwriters. I must say that hearing my own song on Homegrown has felt like a major milestone. It says to me that my music has enough value that it is worth being broadcast to all of San Diego and confirms my own belief in my songwriting ability. I’m sure other artists can relate – that’s how important I think the Homegrown show is.

The path she has taken in building her business originates with Cathryn’s own love of singing.

Cathryn: “I began working 9-to-5 in the real estate industry in the mid 1980’s, about the same time I discovered my love of music and performing. Over the next 10 years I struggled to maintain my increasingly successful career in the business world while endeavoring to follow my heart and dreams of becoming a famous singer or, at least, somehow making a living in the music industry. That journey kept me on the move from California to Wyoming to Florida to Ohio and finally, back to California (San Diego!) in 1999 where I continued living the double life most musicians know so well…business professional by day, rock star by night.”

About 10 years ago Cathryn began hosting an open mic to supplement her income. With her business background, she soon realized that there would be a bigger benefit to the artists and venues if the performances were scheduled, i.e. in a showcase format featuring half hour to hour sets. She began to book showcases at any venue that would have her, charging to haul around a PA if necessary. At one point she was hosting five nights a week and running a printer repair business by day all at once!

Cathryn: “Around 2005 I was able to cut the ties to the day job completely. In an effort to define ListenLocalsd.com, I called myself an ‘entertainment coordinator’ because it didn’t make sense to call myself a booking agent or promoter. I wasn’t trying to do that. I just wanted to provide opportunities for bands to play (and audition for) new venues, meet each other, make new fans, sell some merch and have a good time. That’s still my mission all these years later.”

Cathryn stressed to me the importance of figuring out my strengths and turning them into a way to do what I love for a living. She also suggested utilizing the helpful perspectives of friends and mentors, and accepting help when starting out. Cathryn credits the people who helped her in the early years: “Hotrod Harris gave me $500 to start the website, Matt Silvia loaned me $1500 to buy a PA, Tim Flack’s photos created a buzz and Erica Mantone taught me about trade and how to ask people for things. These are just a few of the people who were important in helping ListenLocalsd.com get started but without them I wouldn’t have made it.”

Cathryn says she is very proud of what she has accomplished in the last 10 years, and is excited about what lies ahead, as I think she very well should be! It is so apparent that she loves what she does every day. She is often thanked for providing opportunities to artists, but what they may not know is that it is Cathryn who is truly grateful to every single musician who plays a showcase: “Besides the joy they get/give when entertaining, their support and donation of live music keeps ListenLocalsd.com alive. In return, I promise to keep doing everything I can to share San Diego’s musical gifts with the world.”

In addition to running a business and a band, Cathryn also has an interest in stop motion animation video production (view one of her music videos here) and this winter Cathryn’s Closet, a second-hand clothing store geared towards musicians, will debut online. “I am of the belief that you should always have a lot of irons in the fire,” she says.

Cathryn has definitely forged her own career path, building her expertise and partnerships over many years. I am inspired by the idea of making one’s own niche career by filling a need that’s out there. However, right now I don’t think the niche I am seeking will be something along the lines of what Cathryn does. The two things that immediately come to mind are, first, why would I want to compete with Cathryn, and second, where am I going to get a Rolodex of several thousand musicians and industry people? However, I do think there may be an opportunity to partner with her one day should an idea for my own event arise. In the meantime, the job search continues… I do know that her husband, Jon Edwards, is a professional live sound engineer. Maybe I would like to try running a sound board?